The Board of Management is the body responsible for the congregation’s day-to-day governance.

It comprises seven members and is elected at each year’s Annual General Meeting. Every financial member is eligible to nominate and vote for Board positions, all of which are honorary.

The public face of the congregation is its President, who also chairs the Board’s monthly meetings. Other office-holders are the Vice-President, Secretary, and Treasurer.

Jeff has been a member of the Hobart Hebrew Congregation since moving to Tasmania in 2014. He and his wife Lisa are the parents of two young children and love living and raising a family in Hobart. 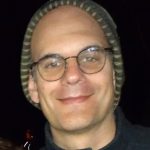 Originally from Baltimore in the United States, Jeff grew up in a large Jewish community. He was raised in a Masorti synagogue and had a particular connection with traditional Jewish food, as his mother was a professional pastry chef who provided many goods to the local Jewish delicatessen. Jeff spent many nights with his family rolling rugelach and teiglach, and taste-testing mandelbrot. As a teenager Jeff’s connection with Judaism was strengthened by participating in the Maccabi Youth Games, where he enjoyed meeting Jews from all over the world.

While living in Washington D.C. Jeff met Sydneysider Lisa when she was studying in the States. On their first trip to Australia in 2011, they spent a week on holiday in Tasmania during which they attended a Yom Kippur service at the Hobart Synagogue. Jeff and Lisa made their return to Tasmania in 2014.

Jeff thoroughly enjoys the Tasmanian lifestyle, with local food and outdoors activities being a main attraction. He is happy to be a member of such a historic and diverse congregation and to be in a position to make a positive impact on it.

David was born just down the street from the Synagogue at the Royal Hobart Hospital but managed to avoid getting involved in matters religious until somewhat later in life.

Being interested in music, he was attracted to the beautiful liturgical tunes which feature in the prayer services, eventually learning enough of these to lead a rudimentary service.

Another of his interests is showing visitors over our beautiful and historic shul, an activity that particularly appeals to him because he has met and befriended an amazing range of the world’s Jewish population, from young Israeli backpackers just out of the IDF to movie directors.

For relaxation, David does something completely different: once a week he plays bass guitar in a country music band, occasionally adding a song or two, sometimes of his own composition.  It’s all strictly amateur, with the proceeds used to keep a local community radio station on the air.

Sean grew up in Hobart. He became interested in Jewish identity and history during high school, and was a lay leader at the shul following his bar-mitzvah. After high school, Sean spent a year in Israel with Netzer, the progressive Zionist youth movement (where he met his future wife, Sarah).

Once back in Australia, he moved to the mainland to study engineering and visual arts at Melbourne Uni. While at university, Sean was a madrich (youth leader) with Netzer, helping to run activities and camps for Jewish schoolchildren. After a 13-year hiatus, he returned to Hobart in 2017 with Sarah. Their first child, Netta, was soon to arrive on the scene.

Sean joined the HHC board in 2018. In the role, he is hoping to help facilitate Jewish study and activities for the community.